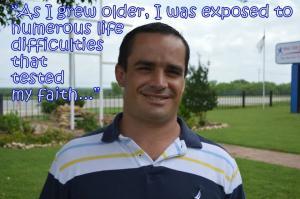 Hello, my name is Daniel.  I grew up in Copperas Cove, Texas.  I was raised in a Christian family and was saved at a young age.  As I grew older, I was exposed to numerous life difficulties that tested my faith.  Among them was the divorce of my parents.  This led to a lot of depression and feelings of social awkwardness.  By the time I was in high school, I wanted to fit in and that led me to drinking, smoking pot, taking ecstasy, and methamphetamines.  Even though I did all of these things, I still managed to make good grades and was able to secure a recommendation to the U.S. Air Force Academy from a congressman.  After that, I received a phone call from a liaison officer wanting to schedule a physical.  I knew that I couldn’t pass a drug test so I let that opportunity slip by.  I tried going to college, but my addiction caused me to drop out and settle for just working low paying jobs.  By the time I was 28, I was only into using hard drugs.  After trying to quit hundreds of times and being unsuccessful, I enrolled in Adult and Teen Challenge of Texas.  Now, I have been able to get away from that lifestyle and get closer to God. I’m working on studying His word and getting to know Him better. My favorite scripture to apply to my life is Lamentations 3:22, “Through the Lord’s mercies we are not consumed, because his compassions fail not.”